We made our rounds yesterday through the Boise 83709, Meridian 83642, and Star, and actually had some time to get to Kuna and take care of more than half of our current list there. We did run into a few that were quite difficult because some had removed the covers off the valve boxes which caused the valves to freeze and make them very difficult to blow out. DO NOT TAKE THE LIDS OFF YOUR VALVE BOXES! The valves WILL FREEZE. Just brush them off so we can find them. Even if the lids freeze on from the moisture we can get them off with our tools.

It's amazing that although we closed down to new requests at the end of the day on December 4, sprinkler blowout requests are still coming in. We have had 23 new sprinkler blowouts starting December 5. The good news is I am going to try and get to them, but only after I finish my current list of that last group that came in December 4th and before. That SHOULD be finished today, and then will start working in the totally new ones. I do have to call it quits at some point, and I know I won't be working the weekend this time because I have plans that were made long ago when I figured I would be finished by this point. I have other jobs starting to back up as well, and frankly, after nearly 1,000 sprinkler blowouts I am tired.

I will have assistance again today, so hopefully it will go smooth. There is supposed to be a snowstorm coming in, but I do not believe it is until late afternoon, which hopefully I can finish my route by then. Depending on the snow, I may or may not be able to get out on Friday. The temperature is supposed to get in the low 40's on Friday, which will melt off much of the snow, but will have to wait until late tonight to make that decision, so stay tuned! Here is our route for today. It is pretty spread out, so the image won't show as much detail as some of the other routes I posted, but it should give you an idea where you are if you are on our route for today. Everyone on our route for today should have received a text reminder as well. An important note to point out:  I have a sprinkler blowout on Vinifera in Kuna that my mapping software has been unable to find, so I will be putting the address in manually.  It will fit between #3 and #4, which will move #4 and all other numbers up one.  Click on the image for a larger view. 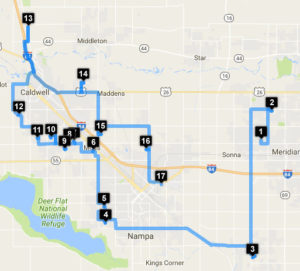 Let’s Try This Again, Shall We?